Beauty,
My Angel Cat
by Rhio

I once had a beautiful Burmese cat who adopted me one day in the shopping mall. I was at the mall that day to buy a dress, but Leigh, my companion, wanted to stop at the pet shop to see the animals, but I didn’t want to. I ended up going through (the pet shop) and then back out to search for the dress. Finally, since the elusive dress did not appear, on the way out of the mall, Leigh says, “let’s stop at the pet shop,” as he dragged me in again. This time a kitten that had been asleep before was now wide awake, took one look at me, reached out her paw, grabbed my arm and while looking straight into my eyes said “meowwww – I’m going with you”. The kitten was so forceful in her desire and intent that we just had to take her out of the cage and we went into a little room that they had there to become acquainted.

The Burmese was on sale, marked down from $400. I never thought I would ever spend $150. for a cat ever, when so many are in the pound, just waiting for someone to love them – but this kitten had me mesmerized.

And so, I came home that day with a kitten, rather than a dress.

From the first day, Beauty, as we named her, was most unusual. She was like an angel cat, but I guess most people feel that way about an animal that they’ve befriended and loved. But I’ve had cats before, but never any one like Beauty. Beauty was delighted to be in our home and she ran back and forth from Leigh to me not able to contain her joy. But from the first she showed that her attachment was to me, and although she liked Leigh too, he was #2.

Beauty was not too friendly to other cats, especially when first meeting them. When first encountering another cat, she became like a ferocious tiger and her face contorted and distorted until she was unrecognizable and you wondered if that could be your little angel cat. One day Leigh brought me another cat as a surprise. She was an Abyssinian. I had always expressed an interest in Abbys. Beauty, of course, did her contortion act in the beginning but after a period of time she became curious about “Peaches.” Peaches had also been marked down. Leigh got her for the bargain price of $100. because the breeder wanted her for breeding but she wouldn’t go into heat.

After approximately 3-4 months on a raw food diet, Peaches went into heat.

Peaches didn’t know how to play. Apparently, she had not been among kittens or cats that played, so Beauty made it her job to teach Peaches how to play. And she did it in slow motion so Peaches would not be afraid. Beauty would come up to Peaches and would speak in a low murmur while putting her paw out to play – all done in very slow motion. After about a month of this almost daily routine, Peaches finally learned how to play, and after that they would romp together.

Beauty loved to travel, especially by car. She was never afraid, not even once. She would startle the truck drivers in the big silver rigs, because she would stand with her paws on the window looking up at them in awe.

Beauty would walk down the street with you, strapped to a leash. When we took her to Cape Cod with us on a vacation, she even went bicycle riding with me and she was in heaven on the bike trail because there were so many sights, sounds and smells of Nature – she loved it. I had her in the basket with her leash strapped to my hand. But she stood up in that basket and rode the wind, only looking back once in a while to make sure I was still there. Otherwise she was completely absorbed and fascinated by the birds, butterflies, insects, rabbits and other creatures.

She didn’t like the roar of the ocean though. That was a sound she was afraid of, and we couldn’t get her close to it.

In our loft in NYC, Beauty had plenty of space to stretch out, roam and run, but when we lived in California in a very small apt. for a period of time, she felt enclosed and wanted to get out, out, out. She would study how we opened the door by turning the handle. More than once we caught her hanging from the handle, trying to turn it. Another thing she would do is hide and wait for someone to open the door, and then she would go scooting out at lightning speed, before anyone could catch her. Ah! Freedom at last, at least until she’d had enough. Then we’d usually have to rescue her from the roof. She could get up there pretty good, but coming down was another story.

Beauty always knew when you were a little down, because she would come onto your chest and give you little kisses on your chin. Even if you had a face masque on, you know the kind women put on to help keep their skin smooth, she would come up and she didn’t seem to mind. You were you no matter what gunk you had on your face or how you looked. She always made you feel good.

And I don’t know, something about the toilet seat, whenever I would be on it, she had to come running and jump right up to my shoulder with her body pressed against mine very affectionately, pushing her face into my hair. And she gave Leigh lots of affection too. Especially since he fed her. But mostly she favored me. Leigh would always be chagrined because of this. He said, here he took care of her primary needs but her loyalty was to me, who never did anything for her. But that wasn’t exactly true. I did plenty for my Beauty. Mostly I loved her with so much love that it fills me with joy to this day.

One time when we did a photo shoot for a clothing ad in our loft, Beauty just had to be in the picture. She was walking around endearing herself to everyone. We had an oak wooden filing cabinet that was being used as a backdrop. It had one small drawer missing. Beauty climbed in there – turned herself around to face front and was ready for the picture. Say Cheese! She had never shown the slightest interest in getting into that filing cabinet before that day. Of course she ended up in the picture.

Beauty, because of the inbreeding that is done with bred cats, was genetically weak. For twelve years she was on a raw food diet, and never sick one day. We had no vet bills. She never would eat her greens though, unless we took her to the roof garden. There, her natural instincts would kick in but we couldn’t take her to the roof everyday. So mostly she wouldn’t eat her greens.

I’ve had to forgive myself many times for Beauty’s demise. Approximately a year before her passing, we stopped taking Beauty with us on trips. This was a mistake. Other cats you can leave behind, but not Beauty.

I was busy — concerned with my mother and step-father’s health and taking them to the Ann Wigmore Institute in Puerto Rico. When I came back, I was concerned with Mom’s health and teaching her how to make the raw foods. One day Beauty gave me a reproachful look I’ll never forget, like saying, why have you ignored me? I miss you.

I think while we were gone, the people charged with her care did not give her the raw food, it became too much trouble for them. When I got back I was too busy to notice that anything was seriously amiss. Beauty developed kidney disease and quickly passed. The vets we took her to were of no help to us, they didn’t even tell us about the option of hydrating her with extra water through injection.

Approximately ten days after her passing, I had a very vivid dream in which Beauty was on the bed, I told Leigh that Beauty was on the bed and he said I was dreaming. But I screamed to him to turn on the light. He got up and turned on the light and there was Beauty, prancing around like the first day we had gotten her. She had a beautiful red ribbon around her neck. She was so excited. I got the message from this vivid dream that Beauty was telling me that she was brand new (red ribbon), that she was alright, she was fine. She came back to tell me, so that I wouldn’t feel so bad and so that I wouldn’t feel so guilty for neglecting her in her last year.

Since Beauty, there have been other cats that we have taken in or taken care of for short periods, but I have never been able to replace Beauty, nor do I want to. If a cat or kitten wants to adopt me again one day, then maybe it will just happen. But Beauty will always be my Angel Cat. The best $150. I ever spent in my whole life. 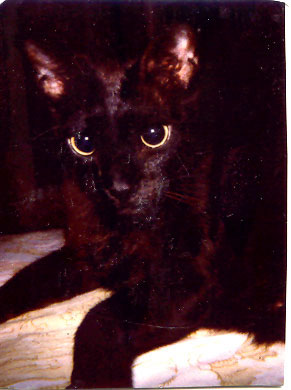 Back to Articles by Rhio

This site uses Akismet to reduce spam. Learn how your comment data is processed.