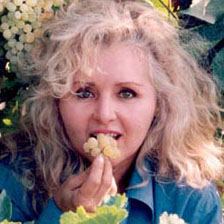 Rhio is a singer, and author, as well as an investigative reporter in the area of health and environmental issues. Rhio is of Hungarian-Cuban descent, raised in the U.S., but completely fluent in Spanish. Her first book Hooked on Raw is about living a life more closely aligned with Nature by adopting a raw/live food lifestyle. The 358-page book also covers many of the reasons for making these healthy lifestyle changes, as well as more than 350 raw recipes in all categories.

CNN and American Journal aired stories on the raw food lifestyle featuring Rhio. She is considered very knowledgeable in the area of raw and living foods and lectures on both the raw/live food lifestyle and the genetic engineering of seeds/plants.

As a singer Rhio has appeared on numerous radio and TV shows. Currently she is completing her third CD jazz album entitled Blue Moods which includes some original songs written by her partner, composer-producer Leigh Crizoe. A song, Some Say written by Crizoe and collaborator, Eugene Orland, and sung by Rhio appears in the 2014 movie The Last of Robin Hood, starring Kevin Klein and Dakota Fanning. For more information on Rhio’s music projects, visit: www.Rhiosmusic.com

Rhio hosts an internet radio show called Hooked on Raw which can be heard worldwide at: www.nytalkradio.net

In New York City, and on the farm Upstate, Rhio hosts events, classes and talks from time to time. To keep up with those, please check Rhio’s Itinerary.

On the horizon: Rhio and her partner Leigh, are also fledgling permaculture, truganic, biodynamic, eco-farmers in Upstate New York, with a focus on growing edible wild foods, heirloom and unusual vegetables, leafy greens and lettuces, fruit, berries and nuts.